Got dressed and out of the house in a hurry, this cold morning. Phone call from son: the dog was refusing to leave the off-leash park, after a chance encounter with one of his favourite humans. The dog is nine months old, a lively pointer / beagle cross with perhaps a trace of border collie: friendly, playful and intelligent, but obedience is not his strong point. We are working on this.

If there’s only one of us trying to get him home, it can get very difficult. If another family member arrives, however, the problem evaporates. The moment he saw me, he was on the move.

On the way home, I realised I’d thrown on my current winter gear without a thought. It’s a scruffy ensemble in which I feel almost completely at ease. And this doesn’t come easy to me, after a lifetime of struggling to feel comfortable in my clothes. This blog might as well have been subtitled: ‘On not knowing what to wear’. Over the last few years, trying out one pattern / fabric combination after another, often failing and occasionally getting it right, I’ve moved towards an easier range of clothing: comfortable separates, worn so often they’ll probably need replacing some time soon.

This is what I found myself wearing.

There was a dark red padded vest from a Uniqlo sale last year, which has been worn constantly. Melbourne isn’t often cold enough for a full-scale winter jacket – I do have one, bought in England about seven years ago, and it’s been worn about twice this year. The vest goes on when I go out, and it often stays on when I come back in. Light and warm.

There was a Uniqlo T-shirt underneath everything else – pure cotton, becoming less common on the shelves of our local store, is it possible they’re moving over entirely to synthetics? Buy your cotton T-shirt now or else.

There was a grey wool cardigan which was an extravagance many years ago, bought at an Italian shop in Lygon St Carlton, which no longer exists. It has outlasted many cheaper garments and is still going strong, while, I’m afraid, Uniqlo woolly cardies, which look so good in the shop, begin to fall apart after a few months’ wear.

There was a sleeveless blue dress, with an up and down hemline. The pattern came from my friend Barb. She had a favourite garment, bought in the UK, which was worn to bits; and being Barb, she didn’t mourn – she traced a pattern and made another one. As a lifelong dressmaker, this is the kind of thing she does without thinking. She doesn’t even seem to have mentioned it on her blog. Anyway, she copied the pattern for me, and I found some dark blue knit fabric with a bit of texture in my stash 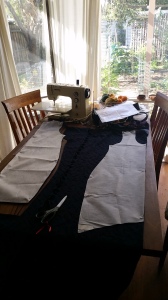 I thought very hard about the binding on neckline and armholes. Barb’s version used brightly patterned external binding, giving her plain garment a little pop of colour. I made bias binding from an old check shirt of my partner’s, which was irretrievably ripped down the spine. I decided to keep it on the inside, on this occasion. I liked the look of it so much that I left the finished garment hanging from a chest of drawers in the bedroom for a week or two, where I could admire it.

The result was, by my standards, a howling success: a comfortable, versatile shift dress that goes with just about everything.

My wide cotton trousers were made years ago, following a pattern in Simple Modern Sewing by Shufu To Seikatsu Sha. This beautiful Japanese book,  translated and adapted for larger non-Japanese wearers, contains the makings of an entire wardrobe, and it occurred to me the other day that if I’d restricted myself to this one book, I might have ended up much sooner with a wearable range of garments. The trousers are pretty roughly made, with a skewiff patch pocket at the back, but they have not come apart.

The boots are Spanish, from Allegro in Lygon Street, Brunswick, which is most unfortunately about to close down. I’ve been buying solid, comfortable shoes and boots there for several years. These have been maintained by an excellent cobbler in Victoria Street, Brunswick, just off Sydney Road.

The beanie is from a stall at the Abbotsford Convent. It stays on in high winds, unlike most of my other beanies. The dog got hold of it the other day, and it took two of us about ten minutes to get it back. Something about the good quality wool? It was a bit slimy but undamaged. Yes, I did wash it afterwards.

The scarf came from a stall at my son’s primary school fete, ten or more years ago, and I wear it all the time. A thick strand of cotton came loose from the fringe the other day, and I found a big needle and mended it; once upon a time I would just have cut that loose strand off. I think it might see me out.

So there we are: a mix of Uniqlo, small suppliers, second-hand and home-made clothing, which temporarily works for me. As soon as the weather warms up, I’ll be back in my usual state of mild panic about what to wear. But Barb is making another sleeveless  dress, patching together a light stretch denim and scraps of blue Japanese patterned cottons, and I think I might follow in her footsteps: shameless plagiarism.

Is it possible that within a year or two I will have reached a state of wardrobe nirvana: a few well-worn, versatile garments hanging in a half-empty closet?