A washing line on a sunny day is a beautiful thing. The clothes of all the residents in the house – those clothes that have been recently worn and don’t need dry cleaning – hang in anonymous rows, forming new colour combinations that may even have something to say about the residents’ ways of being in the world. T-shirts in black, white no longer dazzling, shades of dark blue and navy, jostle for space with dark underpants male and female, socks (occasionally bright red but mostly black or navy), jeans in various stages of fading and disrepair. Men’s shirts like sails. Nothing glamorous about the clothing, but there’s a jauntiness about the washing line as a whole, physical intimacy on display to anyone looking over the fence.

The poet Aileen Kelly once wrote with feeling about ‘the sewage flow of washing’. Well, yes – but the washing line is another matter. A friend once said to me – in the days when she was raising two small girls in the English countryside and I was a young woman about London, childless and political – that hanging out the washing is one of the best things for a woman at home. It gets you outdoors, and you have to raise your hands above your head, which is lovely when you’re mostly bending over to deal with much smaller people.

Sorting the dried washing, on the other hand, is a pain – particularly now that the young bloke’s socks and underpants are almost indistinguishable from his father’s. These days, if I find that it’s down to me to sort a load of washing, I simply extract my own bits and pieces and ask the others to do theirs. Three adults in a house: no reason for any simple domestic task to be allocated to one person rather than another. 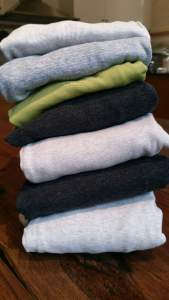 Fairly recently, thanks to Marie Kondo and her book ‘The Life-Changing Magic of Tidying Up’, I learned how to fold my own clothes the way they should always have been folded. Now, after a big wash, I can see what I’ve been wearing. Look at this wobbly pile of folded T-shirts, not quite reaching the Kondo standard of folding perfection: dark grey, light grey, dark blue, off-white, black. A flash of lime green. These seem to be my winter colours. Any day now – like this coming Friday, which promises to hit 25 degrees (that’s 77 fahrenheit in old money) – they will begin to look drab, hot and inappropriate and I won’t know what to wear.

But I have a new-to-me pattern for a summer dress: Style Arc’s Toni,  which I’ve been contemplating for some time. Catherine Daze has made it twice, in the hope that it will accommodate her pregnant belly and still be wearable afterwards. It looks cool and loose and, on her, very stylish.

The pattern (hard copy) arrived last week, and I’ve been wondering what fabric to use. After drifting hopefully around Rathdowne Fabrics and Clegs in Brunswick and finding nothing that was exactly right, I went on line and admired the lovely selection of double gauze at Miss Matatabi. I have never sewn with double gauze, but a lot of people have written about how beautiful it is to wear: light and cool.

So, thinking about my pile of T-shirts and the various shades of blue therein, I ordered three metres of a denim blue double gauze backed with a blue and white stripe: reversible. It hasn’t arrived yet. Already however I’m thinking that it may not be right for the pattern, which would look better in something a little heavier and less flyaway, with a bit of stretch. Will I find something different? More browsing around in Rathdowne Fabrics in the hope of discovering one of their amazing bargains?

And will I go ahead and make something else with the fabric? Baggy trousers for a hot summer day? A loose shirt? A simpler, shorter dress? There’s a Marcy Tilton pattern I’ve had sitting around for a year or so: Vogue 9112.

To my eye, this looks mysteriously awful on the very beautiful model but lovely on quite a range of other people: a delicate garment by the Dashing Eccentric:

and Peg’s wild and wonderful version on Deconstruct Alter Create:

Alternatively, and perhaps more practically, there’s a newish shirt pattern at Tessuti: Helga. It’s simple and loose and would definitely be worn until it disintegrated. Yes: maybe I’ll make a Helga.

This seems to be the process I’m arriving at. I’m seduced by the sight of a garment on somebody else who makes better fabric choices than I do. Choice of fabric for a particular pattern is just about the most important part of making your own clothes, I think – or at least, it’s the stage at which I’ve made the most expensive, timewasting and irreversible mistakes. Plus, the garment that catches my eye is likely not to be something I would wear on a regular basis. There’s a little bit of fantasy for me, in the appeal of the Style Arc Toni dress: it’s for special, not for dragging on in a hurry in the morning.

So I order the pattern and the fabric, and then the reality principle begins to kick in. (1) Look at the drape on that dress. It’s supposed to drape stylishly around one’s ankles, not fly away in the slightest breeze. Double gauze? No. (2) What do you put on every day in summer? Loose shirt and pants, that’s what, in relatively neutral colours. (3) OK, don’t let’s feel bad about this. Lovely pattern, let’s make it out of something in, perhaps the stash (have you checked the stash recently?) or from one of the local fabric shops. Meanwhile, that double gauze would make a lovely shirt…

This is a good process. It means I’m learning from my mistakes.

In other fabric news: I may be the last sewing person in Melbourne to realise that Marimekko has a shop in the Emporium, several floors up from Uniqlo. They had a sale on when I walked in, but even at 50% off, their gorgeous bright cottons were still about $70 a metre. IKEA, on the other hand, has a similar aesthetic and is ridiculously cheap. If you make yourself a summer dress out of IKEA cotton, the main difference, apart from the fact that it is likely to cost under $20 in total, is that quite a few people will say, ‘Oh, that’s just like my new curtains.’ But the dress itself would be fine.