‘Burkini’s veiled threat’ is the headline of an opinion piece in the Melbourne Age today, followed by the subhead ‘The swimsuit is material evidence of chauvinistic oppression’.

Any newspaper article can be badly served by its subeditors, but that doesn’t seem to be the case this time. In the body of the article, Julie Szego doesn’t defend the temporary French ban on burkinis. But she quotes approvingly the French prime minister, Manuel Valls, who describes them as a ‘ provocation’, symbolising ‘a regressive and proselytising Islam hostile to Western values’. It seems that some loosely defined global cultural struggle is manifesting itself around the bodies of women who just want to go for a swim in the sea.

Where can we start with all this? I could begin with my childhood memories of nuns in the full black-and-white gear, roaming the streets of London unchallenged. Current streetwear for traditional Muslim women in Melbourne is pretty similar. Or, for that matter, examine the clothing of Sister Marie Simon-Pierre, whose recovery from Parkinson’s disease was defined as a miracle, contributing to the beatification of the late Pope John Paul II. 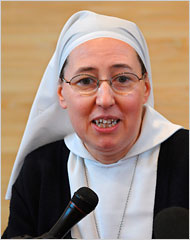 She looks like a shy woman who’s been thrust unwillingly into the spotlight, much more comfortable in her medieval robes than she would be in most modern Western women’s clothing. Or, come to think of it, she might quite like the kind of outfit favoured by Rei Kawakubo of Comme des Garcons – head to toe black, and entirely beautiful. On another, related tack, we have the perils of the strong Australian sun for those of us with pale European skin. My current swimwear involves a basic swimsuit covered up with a rashie that conceals most of my neck and arms, and knee-length boardshorts, plus thick sun cream on all exposed skin. I’m still searching for a waterproof hat that’ll keep the sun off the top of my head and extend my swim time beyond ten minutes and not look completely ridiculous. At a distance and up to our waists in water, it would be hard to tell me apart from my burkini-wearing neighbour. On sensible beachwear I’m taking Cate Blanchett as a reference. Here she is in Vanuatu – and even the divine Cate hasn’t solved the ridiculous hat problem.

I might add to that the challenges of finding the right swimwear for the aging body. Some of us look just fine in swimwear designed for younger women, and some of us don’t. We accumulate bulges in unexpected places, scars, skin cancers from long-forgotten sunburn. A lot of the time we would quite like to cover up, without sacrificing that lovely half hour or so of jumping waves and learning the art of the boogie board under the critical eyes of our children. Cate Blanchett would, I suspect, look fantastic in a bikini; she just doesn’t want to deal with the sun.

So the burkini ban is not actually about covering up, or not. It’s an attack on the religious associations of the burkini, and on Islam in general. A woman in a burkini is announcing her religious and cultural affiliations, and in the current climate there are some people who find that challenging.

In the Age, Julie Szego claims that the burkini ‘embodies the idea that female flesh is shameful, an invitation. That a woman must police herself; is responsible for controlling male desire’. She goes on, unfortunately, to announce that the burkini ‘cannot be stripped of its political context any more than a Ku Klux Klan outfit can be seen as just another hoodie’. Oh dear, oh dear. Is she now defining one of the great religions of the world as comparable to a toxic group of racist murderers?

If my Muslim neighbour wants to wear a burkini at the pool, I simply cannot understand why that’s anyone’s business except her own. Maybe her daughters will grow up to feel more comfortable with semi-nakedness? Or maybe my granddaughters, if I ever have any, will consider the bikini to be a weird cult of the late 20th century, unsuited to the Australian climate and deeply compromised in the way that it constructs and conceals the young female body for male viewing? In a generation or two, we may all have moved on, or we may have much more significant things to worry about.

The article in the Age assumes, deep down, that Western women and their bodies are not ‘living under the yoke of a chauvinist order’ – that sexism, presumably, is a thing of the past. I would love to believe this, but I just don’t think we’ve got there yet. The exposed female body can be understood, if you want to go down that road, as a new kind of conformity, complete with informal punishments for young women who choose not to fit in. We are all a work in progress.

And to preserve the connection to making things that is the rationale for this blog, I’m going to post a gorgeous pattern for swimwear for the slightly less emaciated body. This is the famous Bombshell Swimsuit from Closet Case Files.

OK – this glorious garment is not a burkini. But it’s quite a long way from the bikini too. It drapes magnificently across a grown-up torso, catching the light in way that transforms a bit of a belly into an expression of confident sensuality. I don’t know who the model is – but my god, look at that hat, the sunnies, the lipstick, the jaunty angles of shoulders and arms. She’s probably in her early 20s, but a woman in her 60s could wear that swimsuit and that attitude and look good.

One day soon, when I’ve finished my Chanel-style jacket, and my Issey Miyake coat, and oh yes, the summer pyjamas that got stuck a couple of years ago once it became necessary to attempt buttonholes, one day soon I will check out the eyecatching swimwear fabrics at Rathdowne Remnants and have a go at this one. Maybe not lipstick on the beach for me – but definitely the hat.