What with Brexit, and the dismal state of the British Labour Party, and the recent Australian elections, and all sorts of other bad news worldwide about which I can do almost nothing, it seemed a good time to fall back on acquiring new skills. I picked an advanced sewing class at the Melbourne Council for Adult Education. Bill Woodhouse, who has worked in the fashion business all his life, is now semi-retired, but shares his knowledge of couture sewing techniques from time to time. A bunch of us with varying levels of sewing experience turn up with our projects and get down to work, and he circulates around the room dispensing advice, lending a helping hand, and occasionally summoning the class to view, say, the insertion of an invisible zip or a neat way of gathering fabric on a sewing machine without using a special foot.

No point taking something easy along, I thought. There’s a pattern by the American designer / teacher Claire Shaeffer that caught my eye some time ago: Vogue 8804. I bought it in one of their on-line sales, had a look at the instructions and decided to wait. I’ve written about it before. It’s a  Chanel-style jacket, photographed of course on a slim young woman – and I think what first caught my eye was the motorbike helmet dangling from one of her hands. That classic jacket has somehow acquired a bit of biker cool. I haven’t got a motorbike, and I will never wear shoes like hers – but that jacket became desirable, in that photo.

Ideally, you’d use a lightweight boucle wool to make this. I missed out on one last year at Rathdowne Remnants. Somewhere south of the river somebody was selling exactly what I wanted in a glorious dark blue, on line. But it cost nearly $90 a metre, and this project was so far outside my skill set that it would have been vandalism to embark on cutting out such an expensive fabric, knowing that disaster mostly likely lay ahead. I found a beautiful and affordable green wool/silk mix on Sydney Road, Brunswick at $18 a metre and started the search for an appropriate lining material. Then I discovered a piece of floral silk in my stash, which came I think from Rathdowne Fabrics on a good day, but it didn’t go well with that green. And THEN I realised I had a wool mix in my stash already: a brown / blue mix which came from a warehouse sale in Stewart Street, Brunswick, very cheap, and it looked great with that silk. So the green fabric has joined the stash.

Bill’s course took place over three Saturdays. Knowing that I was about to be seriously out of my depth, I got going early: cut out the main fabric and hit the ground running. Over two and a half weeks, I followed Claire Shaeffer’s written instructions, asked Bill for help, learned some useful short cuts, and watched everybody else’s projects move forward at high speed. Mine, at the end of the final class, had progressed considerably, but it was still in pieces.

Here is the outside of a sleeve. It consists of three pattern pieces, which have been sewn together here, and I have added a trim. I walked all round the city trying to find something that toned in with that difficult greeny-blue pattern in the wool, and eventually found the right thing in Lincraft. The trim should have gone on top of a ribbon, but I decided to take a brisk Bill-like executive decision on that one, and not bother. I sewed it on by hand, with some difficulty, especially on the corner.

And here is the over-the-top floral lining for that sleeve. Really, this silk should have become a floaty summer top, but there is something about a bright, surprising lining in an otherwise conventional jacket that lifts my heart.

Once Bill’s classes finished, my progress through Claire Shaeffer’s instructions slowed down. This afternoon, however, I sat down and read them through to the end, discovering en route exactly how one attaches lining to the back of buttonholes, and working out that there probably isn’t any one single step that is completely out of reach. The next major step, I think, is to quilt the lining to the outer fabric, which means basting along the lines for quilting and then machine sewing them very, very carefully. I will do what Bill kept saying to us, and experiment on scraps of fabric first. I will put aside enough time to carry the procedure out on the whole jacket, and not leave anything undone for next time, because – as Bill kept telling us – if you think you’ve learnt something, the next time you sit down to do it you’ll find that you’ve forgotten, and it’s better to do it all at once.

Once the jacket is fully assembled, I will try it on in fear and trembling. One or two little things have gone wrong along the way, including an inexplicable difference in size between the outer fabric and the lining – and as I discovered rather too late, you are supposed to leave wider seams on the lining, presumably because undersized linings are a Thing and need to be avoided. The only way to fix it at this stage is to make wider seams overall.

Through most of this process, my household was enmeshed in the drama of Masterchef, and I was barracking for Matt, who had a stylish manner with a kitchen knife and seemed slightly less squeaky clean than the rest of the contestants. In the final he was faced with an impossible dessert designed by Heston Blumenthal. It looked like an egg on a nest but it was made of chocolate among other things, and it took five hours to construct. He made one little mistake at the end, and the egg fell apart on the plate. He came second, after leading in the first two rounds of the evening. 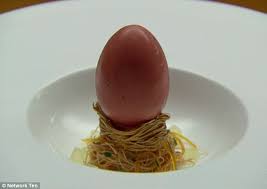 So I’ve taken on board the motivational spiel of the Masterchef judges. If it’s not perfect, don’t give up, just make the best of it.  Think of it as a lesson and try and do better with the green wool / silk mix next time. If it doesn’t fit but turns out more or less wearable, give it to a slimmer friend. If it fits OK but all you can see is that dodgy buttonhole, hang it up out of sight for a few months and then have another look – you might be surprised. But get it finished. Just keep going, do a little more every evening, and you’ll get there in the end. Any day now, I’ll find myself looking in the mirror and chanting, ‘Every day, and in every way, I’m getting better and better.’